I have added some new banner ads to the Affiliate Tools / Stats section of Elite Downline Builder.

These banner ads target people who are already members of one or other of the five programs that are plugged into Elite Downline Builder.

Appeal Directly To Members Of The Programs We Are Working With

The idea is to attract referrals into Elite Downline Builder by making a direct appeal to people who have already signed up to the programs.

This can be an especially effective way of promoting Elite Downline Builder on the two traffic generation sites we are working with, LeadsLeap and Leased Ad Space.

By targeting people who already belong to one or more of the programs in Elite Downline Builder you will have an increased probability of their responding to the ad and signing up.

Use The Banner Ads On Traffic Exchanges And Safelists.

You can also use all the banner ads on traffic exchanges and safelists. Banner impressions are very cheap on those sites and I recommend that you post all the banners on as many such sites as you can. 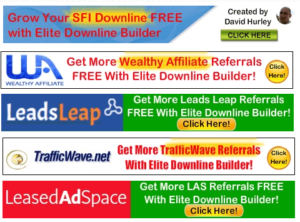 The banners are still very fresh and so they will be more likely to stand out and catch people’s attention, especially those people who are members of the program the banner is appealing to.

A quick note about the LeadsLeap/EDB 468×60 banner

I made if for you to use on traffic exchanges and safelists, NOT on LeadsLeap itself. For LeadsLeap, I have created a special banner and will explain how to use it in my next video training.

If you have any questions or comments, feel free to post them below. I will respond as soon as I see the comment.

4th Edition of "A Thousand A Month" Now On Amazon!

EliteDownlineBuilder.SiteRubix.com (EDB.SR) offers online business advice. In doing so, EDB.SR may link to other sites. Those links may be affiliate links. EDB.SR earns commission on sales generated via affiliate links.

EDB.SR is a participant in the Amazon Services LLC Associates Program, an affiliate advertising program that offers EDB.SR a way to earn fees by linking to Amazon.com and affiliated sites.